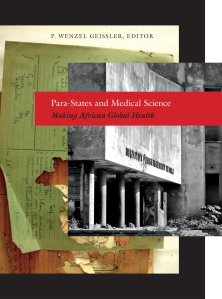 In Para-States and Medical Science, P. Wenzel Geissler and the contributors examine how medicine and public health in Africa have been transformed as a result of economic and political liberalization and globalization, intertwined with epidemiological and technological changes. The resulting fragmented medical science landscape is shaped and sustained by transnational flows of expertise and resources. NGOs, universities, pharmaceutical companies and other nonstate actors now play a significant role in medical research and treatment. But as the contributors to this volume argue, these groups have not supplanted the primacy of the nation-state in Africa. Although not necessarily stable or responsive, national governments remain crucial in medical care, both as employers of health care professionals and as sources of regulation, access, and – albeit sometimes counterintuitively – trust for their people. “The state” has morphed into the “para-state”-not a monolithic and predictable source of sovereignty and governance, but a shifting, and at times ephemeral, figure. Tracing the emergence of the “global health” paradigm in Africa in the treatment of HIV, malaria, and leprosy, this book challenges familiar notions of African statehood as weak or illegitimate by elaborating complex new frameworks of governmentality that can be simultaneously functioning and dysfunctional.