Evidence, Ethos and Experiment: The Anthropology and History of Medical Research in Africa 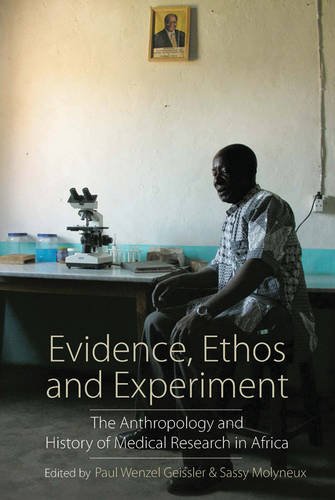 Medical research has been central to biomedicine in Africa for over a century, and Africa, along with other populations in Africa participate in an increasing number of medical research projects and clinical trials, run by both public institutions and private companies. Global debates about the politics and ethics of this tropical areas, has been crucial to the development of medical science. At present, study research are growing and local concerns are prompting calls for social studies of the “trial communities” produced by this scientific work. Drawing on rich, ethnographic and historiographic ­­­material, this volume represents the emergent field of anthropological inquiry that links Africanist ethnography to recent concerns with science, the state, and the culture of late capitalism in Africa.

Review of Evidence, Ethos and Experiment in Medical Anthropology

“Each of the chapters is noteworthy. Together, they offer a promising opportunity to broaden the field of postcolonial science studies in ways that remind us how ethicality is at the heart of these encounters of science… the volume will be useful to medical anthropologists, science studies scholars, and generalist scholars of Africa and global health. Individual chapters, as well as whole sections of the book, will be particularly useful for teaching at the upper-division undergraduate or graduate levels.”  Medical Anthropology Quarterly

“…a series of compelling and well written chapters…Considering the explosion of medical research in Africa in the age of global health, Evidence, ethos and experiment is a valuable and much-needed contribution to the development of multiple contextual frameworks for historical and contemporary medical research in Africa and elsewhere.”  ·  Social Anthropology/Anthropologie sociale

“The book is instructive, interesting and innovative. it draws on strong empirical work and opens up significant discussions concerning epistemological and ethical issues and will be of interest to a wide range of scholars, including medical anthropology, history, medicine, science and epidemiology.”  ·  Tijdschrift Medische Antropologie

“This is an extremely interesting and innovative collection with unusual empirical richness, with ethical and epistemological discussions cutting across anthropology, medicine, history, epidemiology and other disciplines.”  ·  Lotte Meinert, Department of Anthropology, Aarhus University

Chapter 2. Can one Rely on Knowledge?
Marilyn Strathern

Chapter 3. Being ‘with MRC’: Infant Care and the Social Meanings of Cohort Membership in Gambia’s Plural Therapeutic Landscapes
Melissa Leach and James Fairhead

Chapter 4. Contextualising Ethics in AIDS Research: or, the Morality of Knowledge Production in Ethnographic Fieldwork on ‘the Unspeakable’
Hansjörg Dilger

Chapter 5. Testing a New Drug for Leprosy: Clofazimine and its Precursors in Ireland and Nigeria, 1944-1966
John Manton

Chapter 11. Healers and Scientists: The Epistemological Politics of Research about Medicinal Plants in Tanzania or ‘Moving Away from Traditional Medicine’
Stacey A. Langwick

Chapter 13. Is the Sharia of the Doctors Killing the People? A Local Debate on Ethics and the Control of HIV/AIDS in a Rural Area in Kenya
Suzette Heald

Chapter 15. The intimate rules of the French Coopération: Morality, Race and the Postcolonial Division of Scientific Work at the Pasteur Institute of Cameroon
Guillaume Lachenal

Chapter 16. The Mosquito Taken at the Beer-Hall’: Malaria Research and Control on Zambia’s Copperbelt
Lyn Schumaker